The Future Economics of Online Storage 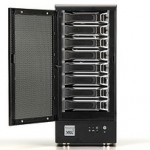 In the book, The Wealth of Nations, the great social philosopher and father of modern economics, Adam Smith, describes a pin factory’s ingenious method of separating each part of the pin-making process into separate functions and assigning those parts to separate master pin-makers. This process was broken down into stretching out wire, cutting it into specific pin-size lengths, straightening it, putting a point on the end, and forming the eye of the pin, and each part had an individual whose sole role was only their process and they specialized at their step so much that this pin factory could generate 48,000 pins in a day whereas if each pin maker undertook the entire process themselves could only manage less than 100 pins per day. Smith was describing what we now know as the assembly line, and more importantly is what is involved in the market-dominating concept made especially famous by JD Rockefeller of Standard Oil known as the economies of scale.

Cloud computing is a relatively new field whose birth in business can be traced back to 1999 when a company by the name of Salesforce.com began offering Software as a Service (SaaS) to customers. At the same time a software design and consulting firm, FilesAnywhere, began offering an online storage as a service. Eventually, thanks to FilesAnywhere’s pioneering efforts, many more online storage companies began sprouting up due to the profitability of such an industry. Following FilesAnywhere companies such as Dropbox, Box.net, Sugarsynch, and Mozy came along to dominate the growing market. Despite the tremendous growth in market users it is nonetheless ponderable as to where and what place online storage will have in the future of computing.

To answer this question we have to look no further than the current explosion of data and information in recent years and many studies of their growth trends have shown that they are being produced faster than we are creating the means to store such tremendous amounts of useful data. Due to the progress of computing and the amount of information generated by the increase of transactions placed online, our necessity of having a service to house data in economies of scale fashion has never been in more demand than now. Although these services are being presented to individual consumers, their biggest benefit will come from the realm of business-to-business storage. As cloud computing becomes more powerful, stable, and cost effective it will ultimately attract more users. The online storage companies will have to begin competing for the business of individual cloud computing companies to offer the benefits of specialization and the economies of scale savings.

Some Additional Thoughts on the Future of Online Storage

Date posted:
*Our Rankings: The rankings and ratings expressed on this site are the opinion of OnlineStorage.org and are subject to change due to popularity, price, special offers, current events and other factors related to each ranked company. Our reviews and rankings are designed to help consumers make informed purchasing decisions. We accept compensation from reviewed companies in order to provide our users with this free valuable service.
Online Storage Statistics
48% of small business have lost or accidentally deleted data from their computers
Data loss is ranked the number 1 challenge to maintaining a business in the event of a disaster
81% of small business feel their data is organization’s most valuable asset
46% of users feel they could never replace, recover, or recreate the data on their computers
Source: carbonite.com
Starting Prices
JustCloud
$4.49/mo
MyPcBackup
$4.49/mo
Zip Cloud
$4.49/mo
BackupGenie
$4.49/mo
SOS Online Backup
$7.29/mo